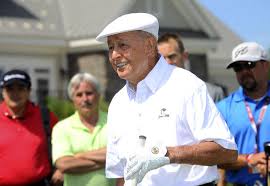 Haydenville native, is the only living member of the World Golf Teachers Hall of Fame; inducted into the Massachusetts Golf Hall of Fame in 2014; ranked by Golf World magazine among the top 10 teachers of the 20th century; five-time PGA Tour event winner during nine-year career; won World Championship of Golf in 1954; instrumental in starting Golf Digest instructional schools, which transformed into golf schools of today; caddied and played at Northampton CC as a kid; full-time teacher at own golf school near home in Boca Raton, Fla